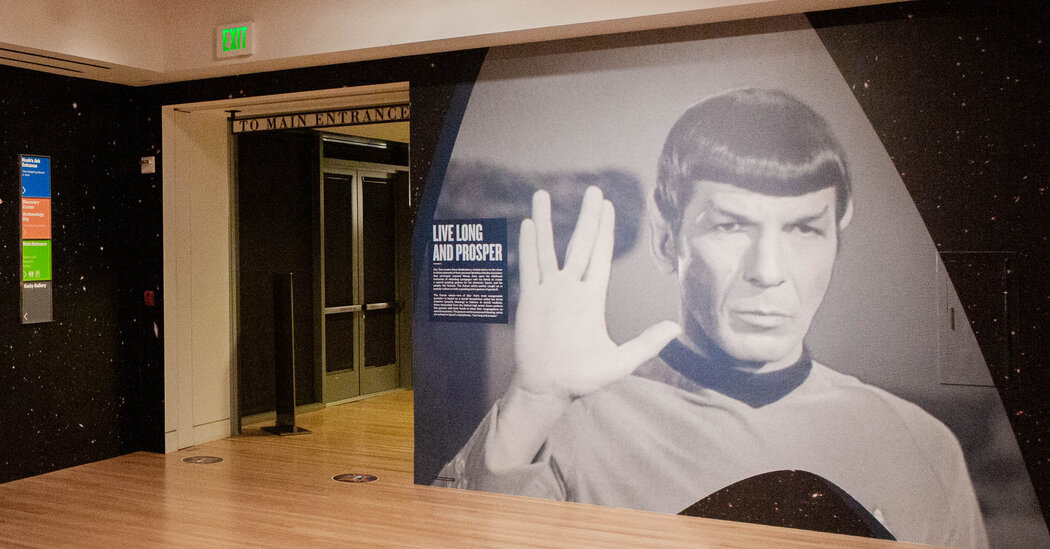 LOS ANGELES — Adam Nimoy gazed across a museum gallery filled with “Star Trek” stage sets, starship replicas, space aliens, fading costumes and props (think phaser, set to stun). The sounds of a beam-me-up transporter wafted across the room. Over his shoulder, a wall was filled with an enormous photograph of his father — Leonard Nimoy, who played Spock on the show — dressed in his Starfleet uniform, his fingers splayed in the familiar Vulcan “live long and prosper” greeting.

But that gesture, Adam Nimoy noted as he led a visitor through this exhibition at the Skirball Cultural Center, was more than a symbol of the television series that defined his father’s long career playing the part-Vulcan, part-human Spock. It is derived from part of a Hebrew blessing that Leonard Nimoy first glimpsed at an Orthodox Jewish synagogue in Boston as a boy and brought to the role.

The prominently displayed photo of that gesture linking Judaism to Star Trek culture helps account for what might seem to be a highly illogical bit of programming: the decision by the Skirball, a Jewish cultural center known mostly for its explorations of Jewish life and history, to bring in an exhibition devoted to one of television’s most celebrated sci-fi shows.

But walking through the artifacts Adam Nimoy recalled how his father, the son of Ukrainian Jews who spoke no English when they arrived, had said he identified with Spock, pointing out that he was “the only alien on the bridge of the Enterprise.”

Jewish values and traditions were often on the minds of the show’s writers as they dealt with issues of human behavior and morality, said David Gerrold, a writer whose credits include “The Trouble with Tribbles,” one of the most acclaimed “Star Trek” episodes, which introduces the crew to a cute, furry, rapidly reproducing alien life form.

That connection was not explicit when the show first aired. And a stroll through the exhibition, which covers the original television show as well as some of the spinoffs and films that came to encompass the “Star Trek” industry, mainly turns up items that are of interest to “Star Trek” fans. There is a navigation console from the U.S.S. Enterprise, the first script from the first episode, a Klingon disrupter from “Star Trek: The Next Generation,” and a display of tribbles.

To some extent, the choice of this particular exhibition — “Star Trek: Exploring New Worlds” — to help usher the Skirball back into operation after a Covid shutdown reflects the imperatives museums everywhere are facing as they try to recover from a pandemic that has been so economically damaging. “These days — honestly, especially after the pandemic — museums are looking for ways to get people through the door,” said Brooks Peck, who helped create the show for the Museum of Pop Culture in Seattle. “Museums are struggling to find an audience and are looking for a pop culture hook.”

It seems to have worked. The “Star Trek” exhibition has drawn 12,000 attendees in its first two months here, a robust turnout given that the Skirball is limiting sales to 25 percent of capacity.

“This has been bringing in new people, no question,” said Sheri Bernstein, the museum director. “Attendance is important for the sake of relevance. It’s important for us to bring in a diverse array of people.”

Jessie Kornberg, the president of Skirball, said that the center had been drawn by the parallels between Judaism and the television show. “Nimoy’s Jewish identity contributed to a small moment which became a big theme,” she said. “We actually think the common values in the ‘Star Trek’ universe and Jewish belief are more powerful than that symbolism. That’s this idea of a more liberal, inclusive people, where ‘other’ and ‘difference’ is an embraced strength as opposed to a divisive weakness.”

The intersections between the television series and Judaism begin with its two stars, Nimoy and William Shatner, who played Capt. James T. Kirk. “These are two iconic guys in outer space who are Jewish,” said Adam Nimoy. And it extends to the philosophy that infuses the show, created by Gene Roddenberry, who was raised a Southern Baptist but came to consider himself a humanist, according to his authorized biography.

Those underlying connections are unmistakable for people like Nimoy, 65, a television director who is both a devoted “Star Trek” fan and an observant Jew: He and his father often went to services in Los Angeles, and Friday night Sabbath dinners were a regular part of their family life.

Nimoy found no shortage of Jewish resonances and echoes in the exhibition, which opened in October and closes on Feb. 20. He stopped at a costume worn by a Gorn, a deadly reptilian extraterrestrial who was in a fight-to-the-death encounter with Kirk.

“When he gets the Gorn to the ground, he’s about to kill him,” Nimoy recounted. “The Gorn wants to kill Kirk. But something happens. Instead he shows mercy and restraint and refuses to kill the Gorn.”

“Very similar to the story of Joseph,” Nimoy said, referring to the way Joseph, in the biblical book of Genesis, declined to seek retribution against his brothers for selling him into slavery.

Leonard Nimoy died in 2015 at the age of 83. Shatner, who is 90 and recently became the oldest person to go into space, declined to discuss the exhibition. “Unfortunately Mr. Shatner’s overcommitted production schedule precludes him from taking on any additional interviews,” said his assistant, Kathleen Hays.

The Skirball Cultural Center is set on 15 acres, about 20 miles from downtown Los Angeles.

The exhibition ran for about two years in Seattle after opening in 2016 to coincide with the 50th anniversary of the original “Star Trek” TV show’s 1966 debut. (That version was on NBC for three seasons.) The exhibition had been intended to tour, but those plans were cut short when the pandemic began to close museums across the country.

The exhibition was assembled largely from the private collection of Paul Allen, the co-founder of Microsoft and founder of the Museum of Pop Culture, who died in 2018.

Peck said he wanted to commemorate the anniversary of the series with an exhibition that explored the outsize influence the television show had on American culture. “The answer that I am offering is that ‘Star Trek’ has endured and inspired people because of the optimistic future it presents — the good character of many of its characters,” Peck said. “They are characters that people would like to emulate.”

“Skirball faced a bit of a challenge in trying to explain to its audience how ‘Star Trek’ fit in with what they do,” he said. “Happily it completely worked out. I had always hoped that Skirball could take it. Skirball’s values as an institution so align with the values of ‘Star Trek’ and the ‘Star Trek’ community.”

Bernstein, the Skirball director, said the exhibition seemed a particularly good way to help bring the museum back to life.

“There was never a better time to present this show than now,” she said. “We very much liked the idea of reopening our full museum offerings with a show that was about inspiring hope. A show that promised enjoyment.”

By spring, ‘Star Trek’ will step aside for a less surprising offering, an exhibition about Jewish delis, but for now, the museum is filled both with devotees of Jewish culture, admiring a Torah case from China, and Trekkies, snapping pictures of the captain’s chair that Kirk sat in aboard the Enterprise.

“There is no such thing as too much ‘Star Trek,’” Scott Mantz, a film critic, said as he began interviewing Adam Nimoy after a recent screening at the museum of “For the Love of Spock,” a 2016 documentary Nimoy had made about his father. A long burst of applause rose from his audience. 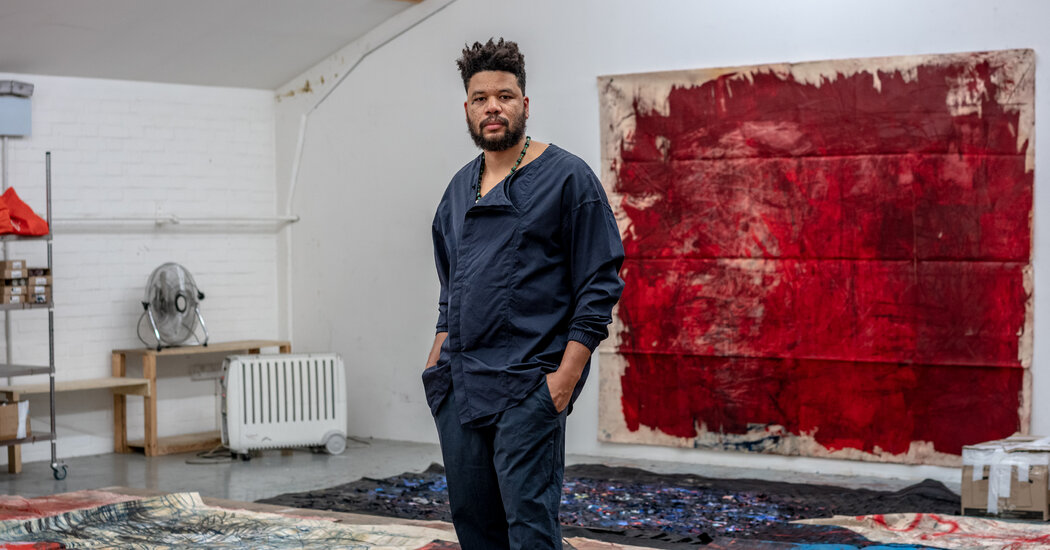 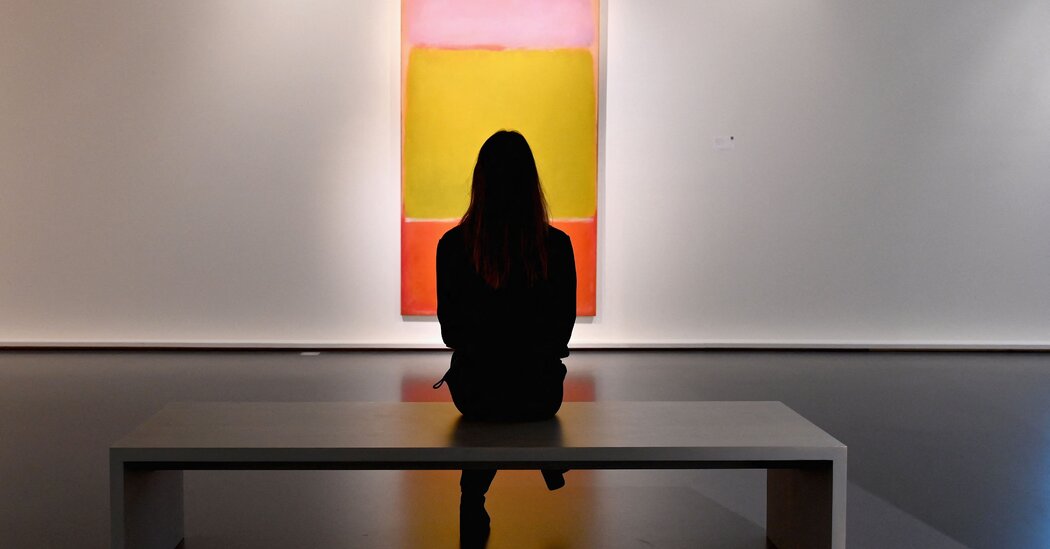